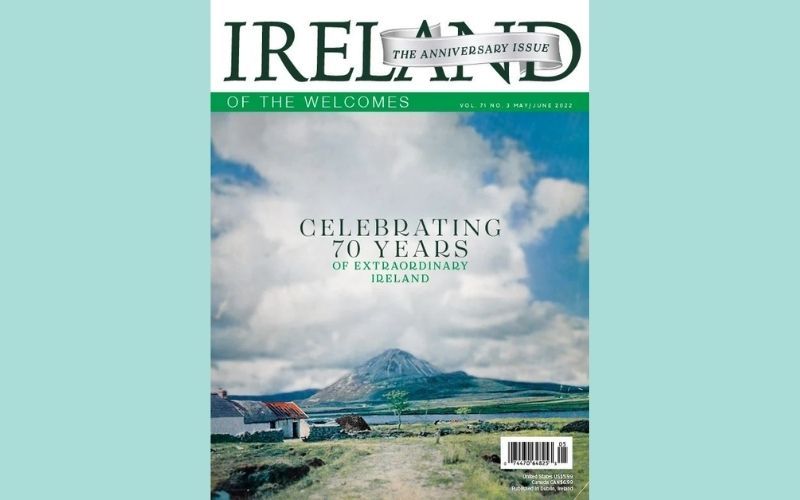 Take a look at the letter from the editor inside Ireland from the 70th anniversary issue of Welcomes. Available now in newsstands across North America and Canada!

Ireland of the Welcomes is proud to mark a milestone in its publication hailing its 70th anniversary as Ireland’s leading magazine of interest. Since May 1952, Ireland of the Welcomes has been the main source of information for Irish tourism for generations, creating a truly spectacular legacy in its pages celebrating its history, tradition, culture and community with exceptional photography and inspiring text.

Welcome Ireland remains this constant companion of all Hibernophiles. In the 1950s, when air travel became more common, the idea of ​​developing Irish tourism began to take hold. In 1952 a government body, which was to become Fáilte Ireland, began publishing a fortnightly magazine to highlight the attractiveness and appeal of the Emerald Isle. Seventy years later, Irish Studio is proud to continue its work by publishing Ireland of the Welcomes.

Ireland copies of the Welcomes anniversary issue will be available from Barnes & Noble and newsstands across North America and Canada. Click here to find your nearest dealer.

The magazine became a mainstay for renowned Irish wordsmiths. In this issue, we feature works by poet Patrick Kavanagh, authors Brendan Behan and Sean O’Faolin, as well as artist Paul Henry and photographer John Hinde. These and other articles are for the first time in decades available to the public. Throughout our anniversary year, we will continue to publish these wonderful articles from our archives in Welcomes Ireland and on our sister site IrishCentral.

Travel in Ireland has changed over the decades. In the 1950s, Ireland of the Welcomes advertised pilgrimages and religious retreats. Of course, as they continue to this day, those with Irish family and ancestry returned to Irish shores and in 1953 the first of a series of festivals called An Tóstal invited all who love Ireland to go back home.

Looking at the transformation of Welcome Ireland over the years, we see how travel has evolved, as air travel has made it easier to get here and cars, trains and buses have allowed us to organize road trips around this small island. What’s wonderful to see is that even though so much in the world has changed since the 1950s, what excites visitors to Ireland remains the same.

Travelers continue to arrive to explore Ireland’s millennia of history, its rich culture and the lush and spectacular countryside with which we are blessed. In the Welcome to Ireland pages, we are pleased to reflect our readers’ inspiration to travel to our island as this magazine has done for seven decades.

While Ireland had its best year ever in 2018 for outbound tourism with 11.2 million visitors choosing to travel, the 2020 pandemic put an end to all our pleasures. However, as we learn to live with Covid, we are happy to see tourists arriving in Ireland again and Ireland of the Welcomes is delighted to continue to be a traveler’s guide as the world comes back to its rightful place.

Ireland of the Welcomes is a timeless publication, always expressing the true magic that every traveler hopes to witness. If we look at how the magazine was promoted in 1963 with the slogan “Ireland today is everything you ever hoped for, much you never dreamed of. Home Ireland is at next to be there. A magazine especially for those of us who can’t be there, but yearn to know what it’s like. It’s a feeling that still rings true for us.

However, today, as Welcome Ireland celebrates its anniversary, we look to the future while addressing the past. Ireland of the Welcomes was the favorite Irish magazine of your great-grandparents, grandparents and parents and now that fantastic legacy is in your hands, so keep your family legacy alive.

For 70 years Ireland of the Welcomes has been more than a magazine, more than a guidebook, it’s a trusted source of all things Irish, down through the decades, like an old visiting family friend every couple of months to talk about what’s wonderful. house and what you must see on your next visit. Ireland of the Welcomes looks forward to its next 70 years of bringing Ireland to our readers around the world.