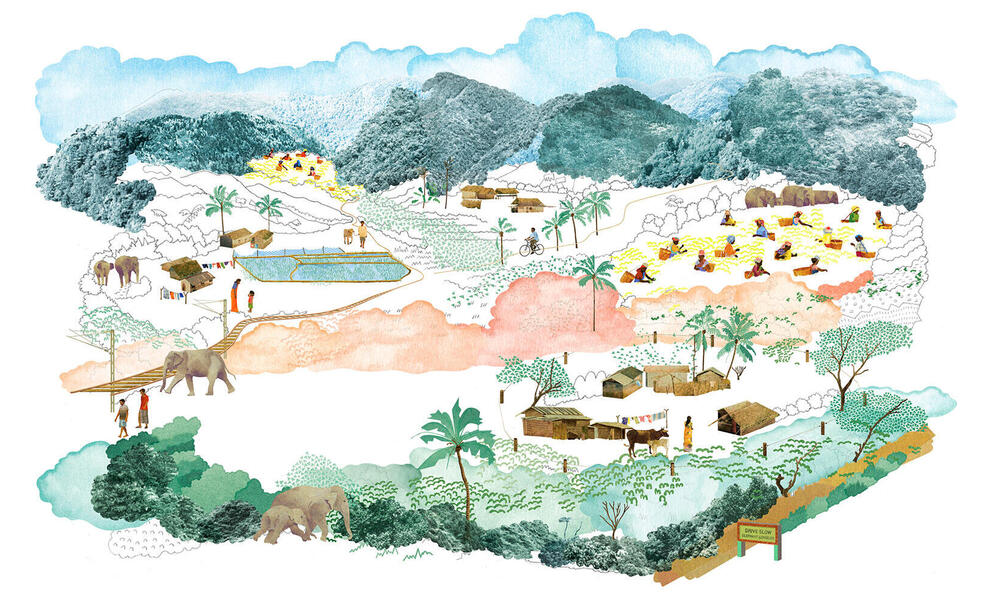 In November 2020, WWF-India wildlife biologist Arjun Kamdar and his team had spent months spotting elephants visiting the vast and multiple tea gardens in Assam’s Sonitpur district. Their objective was to attach a GPS collar to a selected individual in order to collect valuable information on elephant movements. The team of veterinary experts and officers from the Assam Forest Department were finally able to release a female. While she was still awake – but stilled, her attention diverted by a blindfold – they tied the necklace around her neck. Kamdar nicknamed her “Tara” after the Tarajuli tea garden, where she wore a necklace.

The radio collar is not easy. It takes five to seven people several hours to find and tranquilize an elephant. Kamdar, who currently monitors the collared elephant, believes tagging technology is the key to unraveling the mystery of an elephant’s whereabouts during the lean season when it leaves harvested fields for parts unknown. “Where have the elephants been for nine months?” Kamdar asks. The GPS collar could provide an answer.

In Sonitpur, WWF-India hopes to fit a total of five elephants with GPS-enabled radio collars that can transmit more information about which habitats or corridors they prefer, how they move and whether environmental changes alter their migration patterns. .

The team also plans to attach an accelerometer to the collars to understand an elephant’s activity at any given time, whether it’s drinking, sleeping or walking. Extracting location-specific data from GPS-tagged animals could help the Forest Department determine where to extend protection across their range, according to WWF-India’s Brahmaputra Landscape Coordinator Hiten Baishya. And it could shed light on what elephants feed on, helping to determine what types of vegetation need restoring. It could also provide villagers with an early warning of the presence of elephants and help reduce human-elephant conflict.

What if, Baishya and Smith wondered, these fences were replaced with voltage-regulated non-lethal electric fences powered by solar panels – an inexpensive tool already in use in another WWF landscape? “Sunlight,” Smith explains, “charges the system’s battery, which produces regulated pulses that travel through the wire of the fence system.” Unlike deadly electric fences, the new fence technology would deter elephants by delivering a brief electric shock that would not be life threatening.

In 2015, after gaining buy-in from the community, Baishya and Smith helped villagers form a tight-knit community response team of affected villagers and provided them with materials and technical guidance to install a solar fence. And because electric fences require regular maintenance to ensure their effectiveness, the villagers and the Forestry Department elected Anil Bey as the fence keeper in 2016. Bey received part of the lump sum collected from the villagers for maintenance from the fence until the Forestry Department sets its allowance for this task at Rs 4,000 per month.

Closing, of course, is only as good as its upkeep – an ongoing task for which Bey was trained by WWF-India. Bey explains that electricity runs through the fence in the evening during the harvest season, from September to January, when elephant break-ins are on the rise, as well as at night during the lean season, when elephants are less likely to loot. crops and damage property.

Bey’s quick checks and fixes consist of lightly pinching the wire with a voltmeter to check for current flow; clean up any underbrush that could touch the wire and drain the feed; and ensure that the components of the fence (solar panels, batteries and energizers) are not faulty, damaged or removed.

His involvement has helped reduce human-elephant conflict, allowing tea garden workers and villagers to live in peace. “There was a time,” he says, “when they kept crying hysterically over encounters with elephants.”

Community management of solar fences in Biswanath district has reduced elephant damage by 70% in adjacent tea plantations. And there are almost no more sightings of elephants in the villages. In fact, Anil Baruah almost misses the sense of unity he felt during the chaotic elephant encounters of the past.

About 60 miles away, community cohesion around maintaining another 13-mile solar fence remains strong in the eight villages of Sonitpur district, despite incidents of human-elephant conflict that have stalled over the past two to last three years.

Tulsi Upadhyaya, who belongs to one of these villages, Sonai Miri Gaon, is the head of the Hasti Manab Suraksha committee – the elephant and people protection committee – which oversees the villagers’ financial contribution to the maintenance of the fences. . “Everyone understands the need for fences to live near elephants,” he says. “Each household pays between 300 and 500 rupees into the coffers of the committee at least once every three years. And a reliable resident is elected to guard the fence.

Letter from Ms Editors: Feminists have long fought for access to abortion – and we’re not stopping now