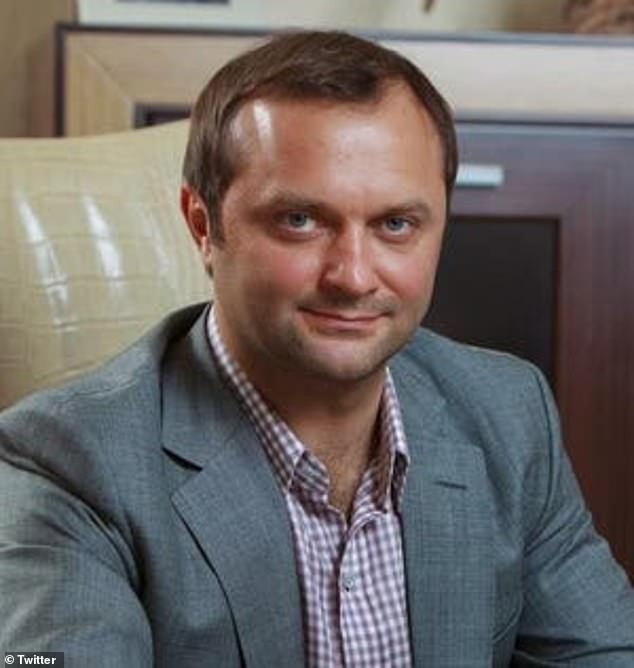 Andrey Muraviev, 47, who made his fortune in cement after the collapse of the Soviet Union, had already been named as the source of cash used by Lev Parnas and Igor Fruman, former associates of Trump’s former lawyer Rudy Giuliani, as they tried to win licenses for legal cannabis and marijuana businesses.

But on Monday it emerged that he had been charged when an indictment was unsealed.

US Attorney Damian Williams said he had attempted to use a million dollars to influence the 2018 elections.

‘He attempted to corrupt our political system to advance his business interests,’ he said.

‘The Southern District of New York is committed to rooting out efforts by foreigners to interfere with our elections.’

Prosecutors told a judge that the businessman was not in custody and was believed to be in Russia. 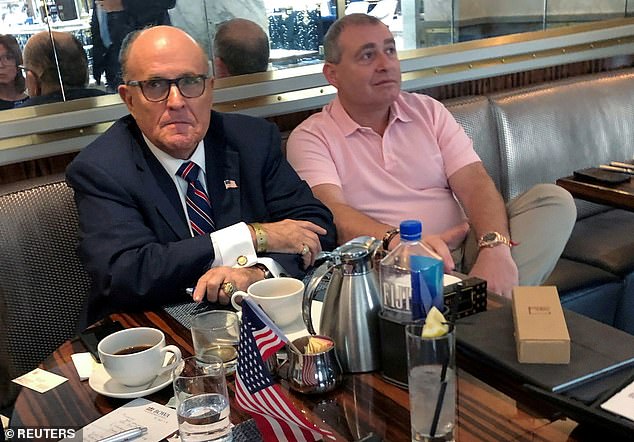 Ukrainian-American businessman Lev Parnas has coffee with Giuliani at the Trump Hotel in Washington DC. Giuliani has not been accused of wrongdoing in the case

Details emerged at a time when Russia’s wealthy elite are under intense scrutiny for their ties to President Vladimir Putin.

Some have had their overseas investments frozen as part of a tightening economic noose on Moscow as the West tries to halt Russia’s invasion of Ukraine.

But Muraviev’s name came up as part of a long-running investigation into campaign dontaions.

‘The money Muraviev injected into our political system, as alleged, was directed to politicians with views favorable to his business interests and those of his co-conspirators,’ Driscoll said.

‘As today’s action demonstrates, we will continue to aggressively pursue all those who seek to illegally effect our nation’s elections.’

Parnas and Fruman were involved in Giuliani’s unsuccessful efforts to get Ukrainian officials to investigate Joe Biden’s son during Biden’s campaign for president.

Giuliani remains under criminal investigation as authorities decide whether his interactions with Ukraine officials required him to register as a foreign agent, but he wasn’t alleged to have been involved in illegal campaign contributions and wasn’t part of a recent New York trial.

Muraviev was the founder of a cement company in Russia before selling it for a vast profit and setting up an investment firm.

Prosecutors said Muraviev’s money was used to reimburse and fund federal and state political donations in Florida, Nevada and Texas, and Muraviev agreed that his money could also be used for donations to politicians in New York and New Jersey.

Muraviev, 47, traveled to Nevada as part of the conspiracy and received regular updates from Kukushkin about the political progress of their pursuit of cannabis and marijuana licenses, the indictment said.

Kukushkin, a Ukrainian-born investor, was scheduled to be sentenced on Tuesday after he and the Soviet-born Parnas were convicted of campaign finance crimes at an October trial in Manhattan.

Kukushkin’s lawyer, Gerald Lefcourt, asked a judge Monday to consider sentencing Kukushkin to a counseling program and community service that would allow him to volunteer to work 28 hours a week assisting with the Ukrainian refugee crisis.

After the Muraviev charges were unsealed, Lefcourt described the government’s timing as a ‘publicity stunt’ designed to influence Kukushkin’s sentencing.

Prosecutors have asked that Kukushkin be sentenced to four to five years in prison, which would be consistent with the calculations of federal sentencing guidelines. In a pre-sentence submission, they dismissed as ‘self-serving’ Kukushkin’s claims that he never agreed to help steer Muraviev’s money to US political candidates and was unaware of US election laws.

Fruman, who pleaded guilty in September to a single charge of solicitation of a contribution by a foreign national, was sentenced in January to a year and a day in prison.