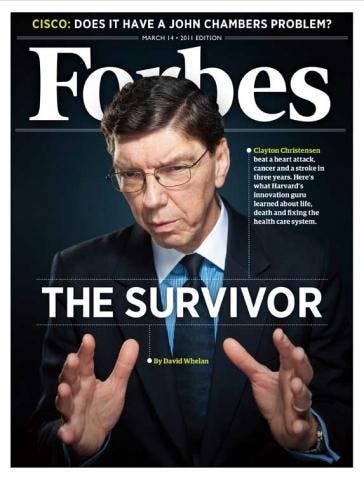 What is the role of a magazine article in a digital world? Can it be effectively retooled for information consumers on the web? Can content originally created for the web be transformed for magazine readers?

Forbes is making great strides in answering these questions, as evidenced by the print and digital execution of our current cover story, The Extraordinary Life of Clayton Christensen. The Harvard Business School professor, who has gained worldwide fame for teaching CEOs what disruptive technologies mean to their businesses, recently completed an investigation into the maze known as the healthcare industry. For Christensen, this work quickly became personal – he beat a heart attack, cancer, and stroke, all in three years.

According to Forbes, there are two groups of consumers of business information – print and digital – and each wants something different. The imperative is to use the same underlying information to serve both. To do this, we are developing new working and economic models. It also means letting content creators know their jobs are changing and then providing the right tools to perform the tasks associated with those new jobs.

For Christensen’s article, Forbes staff reporter David Whelan, on three trips from his home in Philadelphia to Harvard, served as a print reporter, video reporter, and web producer. The concept of the printed piece was an oral history of Christensen’s rather miraculous life course. David has spent hours interviewing and filming Christensen, family members, doctors and colleagues. In print, he has woven a compelling â€œas saidâ€ history of the intersection of academic thought, medical exploration (both personal and professional) and religion.

It was loosely structured around four different illnesses – diabetes, heart disease, cancer, and stroke – with participants in the Christensen drama flying in and out as the story unfolds. It was consumable on many levels – by disease, by participants in Christensen’s life, by his prescriptions to cure the healthcare industry. Primarily, it was the perfect storytelling device for privacy that magazine readers appreciate.

Then David transformed into a web producer to serve the needs of a different audience – an audience that demands as much information as you can give them.

He divided his story into nine articles (according to the lines of his magazine article), contextually inserting the video he took and a photo gallery into each. Here’s Part 1: Healthy Living. More importantly, each of Christensen’s illnesses has become its own post, with links to the drugs, hospitals, and doctors mentioned throughout. In doing so, David was able to create relevant content for the information-obsessed disease groups on the web. Each post is linked to the next, so users can go directly to their area of â€‹â€‹interest. David, like all of our full-time editors, journalists and contributors, builds his own brand and community around his subject-specific knowledge. It takes both expertise and passion. So, in one of the articles, David reflects on what the story and the experience meant to him.

It’s turning magazine content into digital content. Right now, I hear digital pillars say, â€œWell, what’s new? I would tell them, please check out what’s going on in the world of traditional publishers. Most still unload their printed stories into continuous web pages that look ten years old (yes, Forbes is doing a bit of it too, but we’re changing. These old-fashioned pages are being removed as we continue to re-architect our site. to put David Whelan’s authoritative type of journalism at the center of a social media experiment.)

We’ve been working on this for months and our efforts are evolving here as well. In fact, the 24-page content of the last two issues of Forbes somehow began on Forbes.com.

We started it all with “The Conversation”. Instead of letters to the editor, a convention that no longer seems appropriate, we have started to contextually integrate user comments on our stories – from Forbes.com, Twitter, Facebook and regular mail as well – in the different sections. of our magazine. This, in turn, led us to a special digital project called Names You Need to Know, which allowed us to crowdsource portions of our magazine cover from December 20, 2010. Fifteen pages of this issue of the magazine were devoted to a conversation between our employees, contributors and members of the public about the most important – and perhaps least known – people you really should know in 2011.

The notion of printed dialogue has taken another direction. In the February 28 issue, an online conversation between Michael Noer, one of the editors, and Jon Bruner, one of our reporters, was transformed into a fun and informative five-page magazine on the use by Jon of all kinds of tech gadgets on a weekend. trip to Romania. Online commentators have also become part of the print “story”.

In the current issue, a conversation has turned serious. Forbes health reporters Bob Langreth, David Whelan and Matt Herper asked a question on their Forbes.com pages: Will healthcare costs go bankrupt in America? Other Forbes staff and contributors, including Avik Roy, entered the debate, as did audience members. This informative and engaging digital exchange – full of information and perspectives – has been transformed into a magazine discussion (we continue to explore new presentation formats). It comes right after the cover pack from Clayton Christensen.

Where does it all go from here? Simple. We continue to experiment. Marginal changes, along with adhering to the editor-in-chief’s philosophy, will not work in today’s media industry. Emerging audiences have little use for editorial command and control. The web has changed everything. Social media has changed all of that. Now tablets and apps are changing again. Indeed, Forbes embraces the idea that a great magazine or website is a shared experience, both in its creation and in its consumption.

MORE OF WHAT FORBES DOES

Our content strategy, the power of the brand and the way forward

A new homepage, channels and sections – and activity feeds too

My 16th birthday, or what I learned from rebuilding Forbes

The 100 Best Magazine Articles of All Time: A Collaborative List Goes On [UPDATED]